In 1999, the notorious film Audition by Takashi Miike made its debut, first on the silver screen, then on lists of the most disturbing horror films of all time. But the 1997 book by Japanese author Ryu Murakami that inspired the film is equally terrifying—not for its brief but deeply disturbing gore, but for its identification of introspection as the frightening lynchpin of the horror genre. 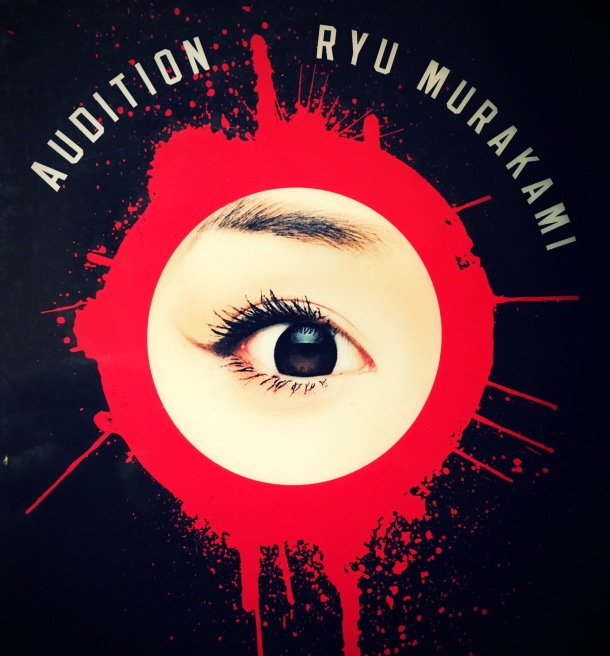 Written and set in Japan’s economically stagnant Lost Decade of 1991 to 2000, the novel’s title would appear at first glance to refer to the skeevy method that protagonist Aoyama employs to find himself a new wife. A widower for the past seven years, Aoyama is the sort of casually sexist, vexingly privileged hero found throughout late 20th-century fiction from around the globe. Prone to cheating on his wife throughout his marriage, he was handed his successful career as a documentary filmmaker by his father-in-law and has generally coasted through life.

As a widower, he continued to sail along, year after year, barely perturbed by his wife’s absence. He remembers her fondly, if generically, as a virtuous creature who devoted herself to keeping the household running smoothly and who never berated him for his frequent infidelity.

“He might have considered remarrying if he’d been too unattractive or too poor to get his sexual needs met, but that wasn’t the case. … He’d ultimately succeeded at [his business goals], solidifying his company’s reputation and status into the bargain, but he had no desire to expend that sort of time and energy on a woman.”

Now, at the ever-ripening age of 42, Aoyama doesn’t miss his late wife, Ryoko; he misses having an “ever modest and self-effacing” spouse who is “quietly supportive of Aoyama in every aspect of his life and career.” At his 15-year-old son’s urging, he decides that he might as well remarry, as long as it doesn’t require too much effort.

Rather than fishing for females in his company’s staff pool or hitting the singles bars, Aoyama decides to take a friend’s rom-com worthy suggestion: He sets up a phony audition for a film that doesn’t exist as a ruse to gather a group of beautiful women who exactly match his age, height, and weight preferences. During the ersatz audition, Aoyama will have the opportunity, à la Chorus Line, to pepper the women with extremely personal questions, such as:

He can then pick out the woman he decides is worthy of him, under the assumption that she will be pleased to learn there was no acting job on offer. Aoyama is certain that he, a mediocre middle-aged Japanese man who can’t be bothered to get out and date, is a much better prize than the starring role in a feature film.

Aoyama does not want an individual; he wants a conformist, a social archetype he can project his own tastes, opinions, and preferences upon. At first, Yamasaki Asami, the winner of his cattle call for a replacement wife, appears to be exactly what he’s looking for.

Yamasaki Asami (tellingly, she is always referred to by her full name, like a serial killer) is an opaque figure throughout Audition. A 24-year-old former ballerina who was forced to quit due to a career-ending injury, she is demure, pliant, tastefully dressed, and easily impressed by Aoyama’s unremarkable upper-middle class wooing, which consists of lunches out and a trip to a hot springs resort during the off-season.

The reason Audition marches steadily from romantic comedy territory straight into the realm of splatter-gore horror is simple: Aoyama isn’t the only one conducting an audition. Yamasaki Asami is auditioning Aoyama to be her next victim: a man who will love no one but her. And when he fails her test (they always fail), she will cut off his feet.

Published in English in 2009, a decade after the film’s debut, Audition resembles Stephen King’s classic slow-burn tale of bodily mutilation, Misery, both in pacing and in its use of a female supplicant-turned-monster as the villain. King’s 1987 psychological thriller focuses on a similar creatively-employed protagonist who finds himself under the care of his “number-one fan,” a nurse named Annie. Like Yamasaki Asami, Annie initially exists merely to serve the protagonist, lavishing him with praise for his mediocre genius and catering to his every desire. However, also like Yamasaki Asami, Annie has a history of brutalizing men. Aoyama and King’s protagonist are each gradually ensnared by the unstable and formerly subservient villain. And both Annie and Yamasaki Asami eventually cut off the hero’s foot.

According to King, his novel’s antagonist is a symbol rather than a character. Speaking with The Paris Review, he made her function explicit: “Take the psychotic nurse in Misery, which I wrote when I was having such a tough time with dope. I knew what I was writing about. There was never any question. Annie was my drug problem, and she was my number-one fan. God, she never wanted to leave.”

The rather pat backstory about the origins of Yamasaki Asami’s madness has been criticized by other reviewers, but this censure misses the point. She is frequently caught telling lies throughout Audition, so there is no reason to believe that her tales of childhood abuse at the hands of a malevolent stepfather confined to a wheelchair are true. The fact that she cannot be believed—and the fact that everyone who meets her expresses as much—is significant.

“There’s no denying that she seems earnest…but something about her bothers me,” Aoyama’s partner in the audition scheme equivocates early on. Later, an aging geisha friend warns him, “She’s like smoke: you think you’re seeing her clearly enough, but when you reach for her there’s nothing there. …  I think you’d be better off staying away from someone like her. I can’t read her exactly, but I can tell she’s either a saint or a monster. Maybe both extremes at once, but not somewhere in between.”

Only Aoyama credits Yamasaki Asami with complete sincerity, harboring nothing but a beneficent void behind her beautiful, bland façade. Even when he sees her falter in her performance, he doesn’t believe she’s deceitful, or worse, inherently evil.

“‘You’re not just toying with me, are you?’ Her voice was an unfamiliar, icy whisper, and her face underwent a sudden and startling transformation as she spoke. It was as if she were shedding some sort of membrane. A wave of goosebumps rippled over Aoyama’s flesh. … He watched her face return to normal. As if that transparent membrane were slowly re-adhering to her skin. It didn’t seem like something she was doing consciously—putting on a mask to hide her true self, for example, or to protect herself from the eyes of others—but rather a natural process, a physical response. As natural as laughing when something was funny or seething over an insult.”

An audition implicitly divides two people into two unequal parties: the judge who has all the power, and the petitioner who begs to be allowed to perform a social role. The setting of Audition plays up this inequality. As The Economist noted in 2009, “For 16 years the [Japanese] economy has, in effect, gone nowhere.” When the economy is going nowhere, the disparity between petitioner and judge is inflated and conflict is inevitable.

Though casual sexism is rampant throughout Audition and Japanese women weren’t granted the right to vote until the final days of 1945, it’s generational differences (in Japan as a whole and between the protagonist and the villain specifically) that form the basis for the novel’s violent conflict.

Aoyama, at age 42, is old enough to be 24-year-old Yamasaki Asami’s father. In addition to the imbalance in power implied by the gap between their ages, he has the privilege of economic stability. He came of age during Japan’s boom years of the 1970s and 1980s. He reminisces about trips to an exclusive geisha establishment and a hot springs resort with his late wife, keeps a liquor cabinet stocked with expensive potables, and waxes nostalgic about the virtues of kaiseki, the costly traditional haute cuisine of Japan, all to the point of accidentally projecting an aura of extreme wealth according to his teenage son.

As Japan’s have-nots, the youth trying to make their way through the financial malaise of the Lost Decade were at a distinct disadvantage—except, that is, for the brutal Yamasaki Asami. She possesses an antisocial individualism that any American who has interviewed for a job, gone on a blind date, or censored a family member from their Facebook feed can relate to.

Ryu Murakami is known for his explorations of violence and other dark, antisocial impulses in his novels. As he explained to Kyoto Journal, “Every society has people who can’t adapt, and their ‘sickness,’ if you will, their inability to adapt, can hold a mirror up to that society.”

The aging geisha’s assessment of Yamasaki Asami could apply equally to most cultures that raise their citizens to be aggressively individualistic: “The young people nowadays—men and women, amateurs and pros—generally fall into one of two categories: either they don’t know what it is that’s most important to them, or they know but don’t have the power to go after it. But this girl’s different. She knows what’s most important to her and she knows how to get it, but she doesn’t let on what it is.”

In a 2013 interview with The Financial Times, Murakami expanded on the roots of the inability of many young Japanese individuals to adapt to a conformist society. “Many Japanese are dissatisfied and frustrated. But they are not good at expressing those feelings so they tend to wall themselves off. And because they have this pent-up anger, they are very unstable. … In my novels there are clear targets for youth to direct their anger against.”

Is Yamasaki Asami—deceitful, fully conscious of what she wants and how to get it, uninhibited about acting on her desires, and irresistibly attractive—a symbol of repressed Japanese individualism, let loose to revel in pure solipsism? Late in the novel, she expresses her socially unacceptable desire for individuality and personal primacy directly:

‘Do you understand? You’ve got to love only me.’

‘I’ve got to be the only one you love. Do you understand?’

Only me, she kept repeating, only me.”

When Aoyama, the representative of traditional Japanese society, reveals that there’s someone else he loves (his son, a product of the past) Yamasaki Asami’s solipsism is threatened. The result is a bloodbath. If society will not place her at its center, she has no choice but to permanently cripple it and leave it for dead without a moment of introspection.

Perhaps this is because, according to Murakami, introspection without an emotional outlet is the real horror in modern Japanese society.

“‘In my novels, instead of being too introspective, I need something powerful like sex, violence or drugs to banish that inward-looking mentality,’” he said. “‘Rage is important.’”